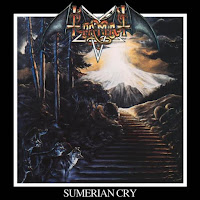 Tiamat is more known as a common good old favorite band for the fans of gothic music, or as a metal classic before the less modest mainstream audience. But as plenty of similar bands that time, they also tried themselves first in the uprising extreme underground as one of it's pioneers in the Swedish scene.
Tiamat didn't play usual death metal, their music included various different musical influences, like heavy and doom metal themes, and they tried small unusual experiments, like occasionally involving jazz elements, some Near Eastern feeling, mysterious whispers in the middle of hammering, acoustic moments, or writing lyrics inspired by Sumerian poetry. The main view is not as bloodthirsty as it could be expected, no matter the common intense speed, or the deep growling narratives. The whole sounding is far lighter than it's used to be in this genre, and the mix of their uncommon ideas are turning the album to a more listener-friendly way. It was shown that the  boundaies of death metal were too tight for their musical creativity, but "Sumerian Cry" gave a new color - a brighter shade absolutely - to the genre.
Posted by Personal Warlock at 10:09 PM