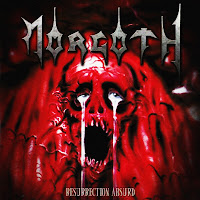 I think Morgoth's first 2 EP's together were one of the most brutal and highest quality old school death metal acts. There were dozens of brutal music in the early '90s, but such insanity with high quality together was really rare.
Morgoth's music was heavily influenced by Death, even in some of their themes on "Resurrection Absurd" some references could be found to "Leprosy" for instance. The intensity and aggressivity of that EP was really impressing, compared to that "Eternal Fall" may sound like a tiny step backwards, but includes more genuine themes, and have excellent Morrisound sounding. The lyrics, which are telling about the sickest and most gruesome aspects of human existence, are also could be taken as Death references. Alltogether both EP's are incomparable and genuine both in themes and vocal style. There was nothing that Marc Greewe's insane growling and screaming voice could be compared to. Morgoth was outstanding from the mass of the early '90s death metal scene, and "Ressurection Absurd/Eternal Fall" is maybe a less known, but very important timeless classic of the genre.
Posted by Personal Warlock at 10:09 PM