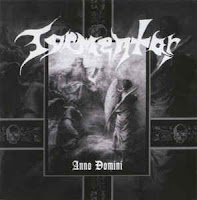 After Bathory, the next significant event in the developing of black metal leads us to Hungary. To find anything connected to metal music had very low chance that time through the iron curtain, but to find something modern, a pioneer band of a metal genre was really exceptional for sure.
The members of the band were very determined to play something unusal and new, so being inspired by the northern black metal scene, which was still in embrionic form that time, they started to evolve their own style. "Anno Domini" used to be demo tape, but as we know, in extreme genres (and especially in this one) the lower quality is mostly not a disadvantage. So they used up the common lyrical topics, like occultism, grim stories of Transsylvania and of course legends of Elizabeth Bathory. "Anno Domini" was very thrash influenced, noisy, raw, insane and atmospheric, it was like their own independent way to approach black metal. It became soon a cult and influental record between the fans of the northern extreme scene. Sadly the band had short active period, but their frontman, Attila Csihar was lately invited into Mayhem.
Posted by Personal Warlock at 8:42 PM