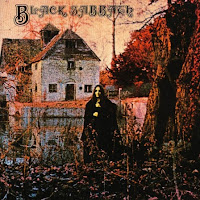 It's always hard to write about bands that everyone knows, and a lot of people wrote about them over a million times already. However, Black Sabbath couldn't be avoided, and this band used to be a common reference if someone's into metal reviews. For this band had the largest influence on the metal genre, and they are mainly responsible of it's forming. We can thank directly them the birth of heavy and doom metal, and therefore indirectly the birth of the rest subrenges.
Their music, sound and lyrics alltogether were so different from other bands that time, that they became an icon, and could be easily distinguished from others in the '70s scene. The deepest, heaviest and loudest band of all time with their lyrical topics of occultism, societal problems, rebelling behaviour, drug overdose, apocalypse were more than unusual on the side of the common songs of love, loneliness and heartbreak. It's another question how Black Sabbath could authentically include all of those, and create an organic picture. And the question may stand even in only one topic, cause while once in their lyrics they signed God as the only way to love, next time they turned into complete atheism. Probably it was up to the type, quality and amount of drugs they used, so there is really no need to merge into a philosophical analysis of their "ars poetica". Only to enjoy that omnious, sometimes depressive, sometimes powerful feeling they created with some psychedelic touch.
Posted by Personal Warlock at 8:53 PM