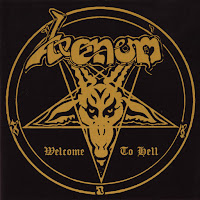 The second big milestone in the development of extreme metal music was performed by Venom. Their appearence with the NWOBHM, which wasn't taken seriously at the beginning, lately had influence on countless bands and led directly to thrash, black and death metal subgenres.
They went further in "sympathizing with evil", like any other bands before by turning the main view as vile as it's possible. Their lyrics were more deviant, and unlike previous bands who showed sympathy to similar dark topics, they didn't tried to dance back to proper religion like Black Sabbath did, or to ease their blackness with romance ballads. They only tried to show a picture filthy and rotten to the core. Most negative critics they recieved because their music wasn't enough complex and progressive according to the mainstream musical development, and they were judged that they only played so fast as their could to cover their lack of technical knowledge. Well, this noisy sounded, untalented thrashing just formed new possible ways to progress musical minimalism, and the cheap attention seeking of the "trio of buffons" became an icon as well. The dirty sounding and intensity of "Welcome to Hell" is an everlasting old school classic, and except it may not sound so shocking now like in the '80s, it could be the same enjoyable for nowadays metal fan audience, like it was back then.
Posted by Personal Warlock at 11:36 AM