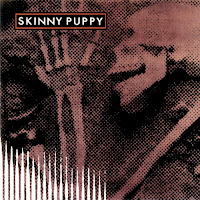 The dark shades reached other genres too out of metal music, or by the indirect influence of metal. However a darker section started to grow out from the noise based industrial scene by the appearence of Skinny Puppy.
Their new, less brightening noises are about to portray an ominous, unfriendly, and cold world inspired by horror and the sickest imaginations. Compared to the earlier issues of the genre, it's heavier, more intense, and darker toned. The lyrics were also not written to cheer up and convince the listener to throw a stress removing party at the end of the week, so we can say it was more like an unsual step in the progression of electronic music. The vocals are sounding like the distorted voice of an endlessly wretched minded murderer from a horror film. I would associate to someone similar to Freddy Krueger. So the main view is pretty sick, and successfully closing up to the similar underground tendencies of other music genres. This parallel development itself is quite interesting, and proved that deviance in music could appear in different forms and with different characteristics, and with nearly the same effectiveness.
Posted by Personal Warlock at 10:13 PM