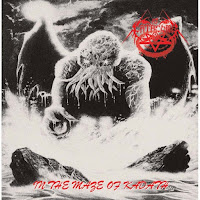 A piano melody introduces into the dark musical manifestation of the mystical horror maze of Catacomb.
The walls of the maze were built up from the inspiration of Lovecraft's novels. The piano intros gave a melancholic impression, and became an important part of the dark atmosphere that is the most catchy feature on the EP. The other one is the melodic ambitions, and the two perfectly fits together and creating a balance. "In the Maze of Kadath" was not a brutality contest, though it's a death metal EP, but it's also far from melodic death. Diverse themes, melodic solo parts, mid speed, and strong, misty atmosphere are the main features. The very deep growling stlye and the occasional speed ups making a contrast, but these are essential parts of the main harmony. The musical concept of "In the Maze of Kadath" is closer to death/doom style than to death metal in general, even though it lacks the successful level of heaviness and extended slow downs. The influence of Paradise Lost is suspected. However, it's a unique record in the line of the early '90s extreme metal classics.
Posted by Personal Warlock at 8:28 PM