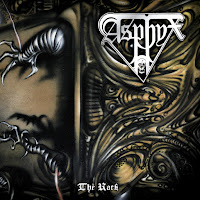 Asphyx's name was well known already in their demo period, but the wider international success came for them after "The Rack".
This album with it's noisy, dirty sounding which may often remind to the background noise of a sawmill, immidiately layed down the main features of the band, and made them an icon in extreme music. This noisy heaviness was partly the outcome of the low budget of the album recordings as well probably, but this was fitting to the bands imaginations for a new kind of heavy sounding. The concept was to play something simple, primitive but very raw and heavy the same time. While most bands that time were into speed up their music as much as it's possible, Asphyx chose the opposite way on the side of a few bands, looking for heaviness by slowing down. The band lately became an important influence of the death/doom style as one of it's first well known pioneers. Martin van Drunen's (Pestilence) suffocating vocal style turned the main view quite hopeless and desperatate and added an apocalyptic feeling to their music. A masterpiece of old school musickness!
Posted by Personal Warlock at 8:16 PM