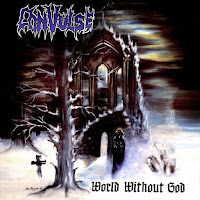 Finland had it's own style of death metal, and this scene had it's own characteristics, and could be distinguished from the other scenes. Similarly to the Swedish scene, they also operated with simple and primitive themes, but involved more melodies.
On the side of Sentenced, which band represented a more complex and mature sounding; Convulse was an important influence in the development of the Finnish scene. "World Without God" was on the other side. This album had a quite putrid sounding, and rude, primitive impression, but meanwhile created an atmosphere, which gave a a new feeling to the unfriendly main view. The melodies, which made this scene more consume-able, were in embryonic form this time, but there were very catchy themes already. Occasionly their melodic ambitions were shown as short breaks in the middle of raw brutality, but "World Without God" is still a pretty raw album with all features of old school death metal.
Posted by Personal Warlock at 8:16 PM