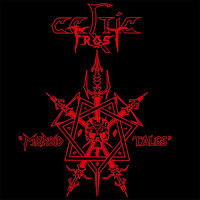 On the side of Venom, Celtic Frost was also found responsible for the forming of extreme metal genres. Their early period (including Hellhammer) also inspired countless of bands and became a main influence. The only cause why their name is maybe less known is that they simply couldn't keep calm, and always wanted to experiment with something else.
However, none of their restless ambitions became so impressive and successful like their early ideas. "Morbid Tales" and the "Emperor's Return" gave a new and effective tone to something what could be called vile music. The dirty sound and the distortion of the music were a more genuinely supportive backup to the lyrics in leading into a darker world. Such as Venom, they also had some balance between the vileness of the music and the lyrics. Not clear singing or yowling tried to prove the sympathy for evil and narrated to dark topics, but a throathy, grunting voice, which doesn't even tried to show anything nice or funny. That experimentally created synthesis of heavy music and aggressive vocals opened the way to something revolutionary new.
Posted by Personal Warlock at 8:48 PM