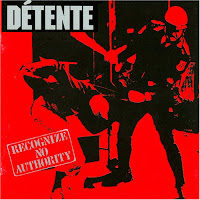 Détente was a short-living, less known and not so successful band which came with the '80s speed/thrash metal wave. Their one and only full-lenght album got lost between the huge amount of similar styled records, even though it wasn't forgetable at all.
Shortly after the release the band was split up and the names of the members became known from various other fields of the metal scene. For first impression their music reminded to Sacrilege, not only because of the shouting vocal style of Dawn Crosby, but the style was also strongly related to the speedy thrashing of Sacrilege. Of course "Recognize No Authory" was a more complex album, including diverse and very catch themes, common speed changes and ass kicking solo parts. In truth the album had no weak points, it had the same intensiveness and effective features that should be expected form an '80s speed/thrash band, but their music didn't become so influental like the bigger names in that scene. Still, "Recognize No Authory" belongs to the golden metal classics of the '80s.
Posted by Personal Warlock at 7:29 AM