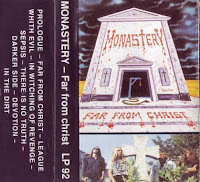 The appearence of extreme metal wasn't so successful and overwhelming everywhere even if the timing was right.
Monastery tried to involve into the actual wave and was between the first bands who tried to establish a death metal scene in Hungary. After their disappearence their name was completely forgotten as well, even though they tried to return a decade later by joining to the that time actual nu-metal wave. "Far from Christ" was an endeavor to create something that fits into the main scene both in technical level and quality. It's a rare ambition in Hungary by the way. It was an ordinary death metal album so to say with simple themes and consolidated intensity. All-in one it takes place in the midfield. Sadly for the quality requirements the album couldn't match because of the low local possibilities of recording extreme metal, and it still had only the tape edition from '92 since today. Despite of the lower quality, the music is still enjoyable and became an interesting relic of old school times.
Posted by Personal Warlock at 6:49 PM