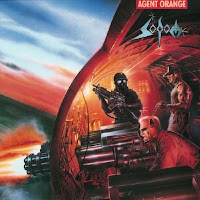 The '80s European thrash scene was doubtlessly ruled by German bands, and on the side of Kreator and Destruction, Sodom was the part of that thrash trinity which had the strognest infulence to the genre.
Their third full-lenght album, "Agent Orange" was a turning point for them in several ways. Musically they counted already as an experienced band with notable routine, the album had better sounding, and their themes became catchier. In lyrics they left behind the horror and occult topics, more serious lyrics were written instead about war and the hideous aspects of reality. I also think that "Agent Orange" is their most rough sounding album. They always seemed like to balance on a borderline, being close musically to black metal in their very early period, lately close to death metal. When this album came out, their name was well known, or better to say infamous already. This was their most successful period, they achieved all, that could have been achieved for an extreme metal band in the '80s.
Posted by Personal Warlock at 5:15 PM