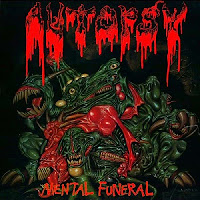 Autopsy was also one of those few bands who tried to slow down, while most others raced with each other who can play faster and more intense.
Chris Reifert's name was known before by Death's "Scream Bloody Gore", and in Autopsy he not only sat behind the drums, but did the vocals too. Their first album, "Severed Survival" was already an exaggerated and pretty sick record even compared to the main death metal scene, but they exceeded themselves in musical sickness with "Mental Funeral". That's because they slowed down and by adding some ominous doom influenced  and mid speed melodies, it became one of the sickest albums of those times. The fast hammering was reduced compared to "Severed Survival" and it's usually there for creating chaos, disharmony and to cast the listener into the depths of a distrorted world of horror and disgust. If operating with the nauseous melodies were not enough, the most revolting lyrical topics about gore, death and necrophilia are wishing a good appetite. An everlasting classic of death metal.
Posted by Personal Warlock at 9:44 PM