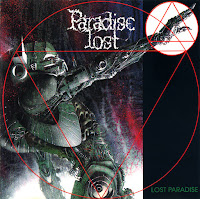 Before Paradise Lost became known as a gothic metal band, they made one of the first death/doom albums with their debut "Lost Paradise". In truth they were pioneers of both styles, and that change was more like a progression than a sudden change.
"Lost Paradise" wasn't a usual mix of death and doom metal genres, they had their own genuine style with their slow, gloomy melodies and themes. No doubts that it was an experiment, like involving things that were uncommon according to the musical scene back than. It's probably the most intense album of the early death/doom style by showing the largest diversity in themes. While this style is usually about simple, slowly repetitive, heavy and extented themes, for Paradise Lost it was like a perfect opportunity to unleash their creativity. So it's not a minimalist album at all, but shows something very new by weird impressions both in lyrics and themes. These sometimes melancholic, sometimes sickening melodies with their unique atmosphere became an unrepeatable icon of the genre.
Posted by Personal Warlock at 8:00 PM