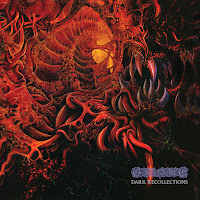 Carnage's one and only album counts as one of the earliest acts of the lately infamous Swedish death metal scene, and also belongs to it's most important local influences.
That's not only because of the timing, but "Dark Recollections" sounded so brutal and rough, that was impressive even in the main scene. There were many ways to show musical aggressiveness, brutality and sickness, to be exaggerated in all-round, but Carnage raised over most of it's coetaneouses, because their music reached a very impressive level at all of those features. It was an effective combination of cruel brutality and sickly insane feeling. On the side of heavy themes, massive intense hammering, dirty, noisy sounding; a very insane vocal style is taking care of the listeners hardpressed entertaining, which is occasionally turning artificially distorted to sound even more animalistic. Maybe early Morgoth could be compared to this raw, extremely intense noisy rampage, that incidentally just reached the boundaries of death metal as a start. This masterpiece counts as a stunning starting push in the development of a scene and took a role from defining it's characteristic features.
Posted by Personal Warlock at 10:13 PM