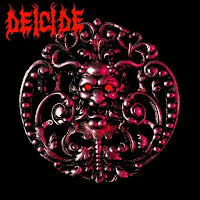 If people normally thinking about death metal and let's say that they know what is this style is about, Deicide would be one of the bands they would mention as a better known example. On the side of Cannibal Corpse, they are the best selling band of the genre.
Deicide became so infamous mostly because of their exaggerated concept about satanism and anti-christianity. Their scandalous,  blasphemous message was putting them into the focus of any sel-styled warrior wannabes of the proper faith in good Christian America, and later world-wide. And of course Glen Benton's attention seeking behavior was like oil on the fire. In truth their concept placed them into the center, not their music. They've done their best to make this album so evil and aggressive as it's possible, to fit well in intensity to the endless hatred and rage they volunteered to represent. Wild, and cathcy themes are usual at this debut, it's probably their best record. Musically Deicide wasn't worthy for their central position, because even the Tampa Florida scene had plenty of better bands, so internationally it could be imagined too. For the rising of this band the limitless aggression of their music combined with their satanic concept was responsible, and of course the big loads of morons who tried to cross them and to ban their gigs and appearences.
Posted by Personal Warlock at 9:05 PM