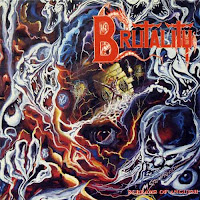 Even though Brutality was founded when the Tampa Florida death metal scene was about to form, their debut came out when that scene was on it's top already, and by this timing, the band evolved into it's second wave.
It was usual at Floridan death metal that all bands had their own features that made easy to distinguish them. Brutality had a raw and powerful style which could fit nowadays to the term "ordinary death metal". "Screams of Anguish" was in the middle way compared to the others. Slower themes, mid speed, and intense aggressiveness were same common, but a frequently returning exact lead guitar theme gave the main character to the music, which often bursting out in short noisy solos. If their music have to be cathegorized, it's somewhere between Morbid Angel and Deicide, but similarly to newer bands of the genre, they showed larger diversity and wider scale in themes. An underrated band for sure, but "Screams of Anguish" took place next to the biggest classics of Floridan death metal.
Posted by Personal Warlock at 8:00 PM