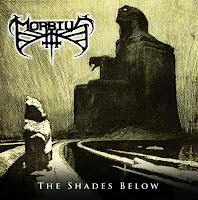 Even though Morbius was not only there at the uprising of death metal, but also recorded a demo tape that sounded more stunning than the first tryings of most bigger bands of the genre, their name still remained unknown.
The reason why is also unknown, but "The Shades Below" was used later as a promo again without sparking notable attention, and much later came out from the pile of the forgotten, dusty '90s demo tapes and had a remastered reissue. It could fit for the role of a full-lenght debut album too. "The Shades Below" was not only longer, but musically far more complex than how early demo tapes used to be. The sound could be called professional too according to the recording circumstances, because they were able to show the maximum from a rehearsal quality. The noisy solo themes and distorted melodies created a genuine atmosphere that couldn't be compared to any of the big names of early death metal. But the feeling is similar to early Paradise Lost. It could sound like a weird or unexpected comparison, but even if the chance of any direct or indirect influence seems unrealistic, there is some analogy. However, "The Shades Below" is an underrated and very interesting old school classic.
Posted by Personal Warlock at 6:51 PM