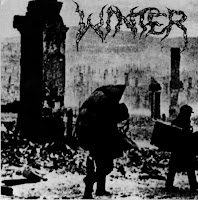 The usual ambitions in extreme music were to extend the borders in speed and aggressiveness. To play always faster, more intense, more brutal. A very few bands tried the opposite way, by reaching extremity in slowing down. Both ways are counting as musical minimalism, but by involving doom influences it was further into that minimalistic way.
The first determined step in that way was made by Winter. "Into Darkness" is like a perfect example how to evolve death and doom metal. The basic death themes and the deep growling stayed, but because of slowing down everything became simpler, and the atmosphere also had an important role. This tempo could fit even into funeral doom, so it was some kind of advenced experiment that time, because even the death/doom style wasn't formed completely yet. Some mid speed appears sometimes to create a balance and to break with rage the endlessly extented despair that's spreading from this album. The oppressive feeling of a cruel and eternal frost was well introduced, and "Into Darkness" is not only a basic album "into death/doom", but also a masterpiece.
Posted by Personal Warlock at 10:16 PM