Goatlord - Reflections of the Solstice (1991) 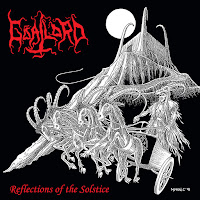 Goatlord was maybe the first band from those who experimented with death/doom the first time. Their debut came later than the other pioneers of this unpopular style, but the sounding suspects some really ancient origin.
Nowadays because of that sounding, the vocal style and the lyrical topics "Reflections of the Solstice" fits into black/death too. It's exaggeratedly blasphemous, and having the lack of any catchy melodies or emotional atmosphere. The slowing down doom influences extending the effect of the cruel and compromise-less feeling that they are showing. Occasional speed ups are also common, and they reminding to the most ancient bands with black metal influences. No matter the slow downs and the extented parts, it's a quite aggressive album in general. Bands which similarly involved directly or instinctly extreme genres this way, were more common in South America, but Goatlord couldn't be confused with them because they had features which lately became specific both in death/doom and black/death styles. It's definitely a unique album of extreme metal.
Posted by Personal Warlock at 8:12 PM