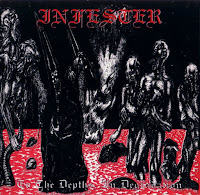 After the biggest death metal classics probably many may thought that the scene was exhausted. And it couldn't shock the metal audience anymore cause everything was made already that could be done in this genre. And then Infester came.
Their one and only album redefined what disturbing sound is. Since death metal is like a musical version of horror, and it's based on exaggerated features, it's not an easy mission to show something extraordinary. But this album made it by it's inhuman brutality. Not the intensiveness was mainly responsible for that, but the dark and demoralizing atmosphere and the endlessly animalistic vocals. It really sounds like rageful screams from a hellpit by the most wretched demons. The combination of the two was something less common that time, since atmosphere rarely had important role in death metal. The main impression was something like the mix of the sound of gory brutal death, the heaviness of death/doom, and the putridness of the crypt reeking old school classics. It's not an easy album because of it's disturbing effect, but definitely a remarkable one.
Posted by Personal Warlock at 7:57 PM