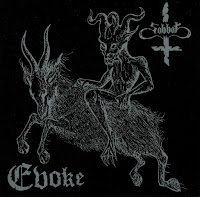 The Japanese thrash/black metal veterans started to shock their small local audience in the mid '80s with a more heavy metal oriented music. Soon after the appearence of black metal, their style became harser too.
'Evoke', their second full-lenght album showed more from these harsh ambitions and had better quality in sound. Venom, Celtic Frost and Bathory should be mentioned in first line as their possible musical influences, but they were never really involved into the new wave. They kept their heavy metal influences all the time. It's like they stayed loyal to the old school sound and style of the '80s. The slowly uprising black metal gave only a darker tone to their music which took place between the most genuine bands of the extreme scene. Not only the themes referring to heavy metal, but the occasional appearence of high yowling vocals too. Their style is like a different and very original approach of blasphemous extremities. The song structures and album compositions telling about a freer musical concept, and far wider borders than it was usual in the genre.
Posted by Personal Warlock at 6:53 PM