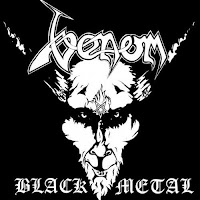 Black Metal is the second album by English "heavy metal" band Venom. With only slightly better production value than Welcome to Hell, Black Metal is still 100% straight out of the 80's. As distinct as Venom is with their style and sound and even behavior, it's difficult to stick them in a genre, and continues to be a topic of debate, like most of the old metal albums/bands because of how drastically the scenes have changed over the last 30 years. Nevertheless, this albums lyrics and imagery were a major influence in the early Norwegian black metal scene.
Cronos insists on calling it black metal (funny, right?) without passing judgment on the genre that flourished out of Norway.
When I first got into black metal as a genre I was introduced to all of the typically associated Norwegian bands like Mayhem and Burzum and the like. I needed more than the almost intolerable noise of trve Norwegian Black Metal; and Venom undoubtedly opened so many doors of black metal- broadened the horizon, if you will. When I first bought this album, I hadn't heard anything of them yet and was just more attracted to the imagery. I knew friends who had always been fans, and I'm not sure why no one directly introduced me to the band. I literally listened to this album for a solid week. You can't put it down and it's unarguably a pivotal album in the progression of black metal, thrash, and speed metal. Fast, raw, blasphemy.
Posted by Kasey Lynne at 5:59 PM