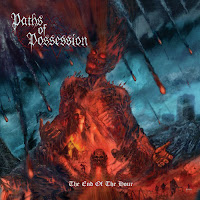 Melodic death metal is somehow a paradox term, and even in practice it might be difficult to pull things together in this style. It's clear that a whole scene was formed for this subgenre in Göteborg Sweden, and after the (unfortunate) style change of Carcass, this scene had main influence in the development of melodic death metal.
But fortunately a few bands didn't step into the line to play this style the same way, like leaving behind all death metal features except growling vocals, and to play something that hardly could be called as something death metal related. Paths of Possession belongs to those few bands who were able to create something that can fit to that paradox term. They've kept most death metal features and only frequent melodies making their music different from ordinary death metal. Unlike most other bands in this style, the song structures didn't simplified and led only by one catchy melody that determines the whole song. The proportion of heavy riffings stayed fixed on the side of catchy melodies, and theme changes are also common. By keeping this musical complexity the band showed an example how to not collapse into emotional masturbation or to how to not drift "accidentally" into mainstream in an audience friendlier subgenre. By the lyrics they also didn't turn away from the roots of death metal, and if it wasn't enough, the characteristic growling style of Mr. George "Corpsegrinder" Fisher (ex-Monstrosity, late Cannibal Corpse) also makes sure to keep it brutal. Their music can be enjoyable for melodic death fans and for ordinary death metal fans too.
Posted by Personal Warlock at 9:45 PM No comments: 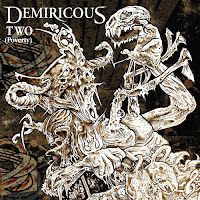 Demiricous debuted as a band with mainly too obvious Slayer influences, and with a sound that was enough harsh and noisy to push further their music to the borderline of death metal.
The first album somehow gave the impression, that the band just randomly mixed their various influences, but by their second arrival they've returned with a more unified style, and the symptoms of Slayer overdose also decreased. On "Two" they've operated with simpler riffs that are suspecting some hardcore influence too, and not only because of the groovier simplicity of their themes, but the vocal style also changed from growling to shouting. However the main view turned closer to thrash metal too and it's more effective by it's bare aggressiveness. Even though the band mostly had old school influences, it's easy to realize that Demiricous is a modern project partly beacuse of the sound and also because of the song structures. But still this fast developed change had a very positive effect on their music and refers to the dirty depths of a real thrash moshpit. All-in-one "Two" is a quite enjoyable and intense thrash material, recommended for the fans of the genre.
Posted by Personal Warlock at 5:57 PM No comments: 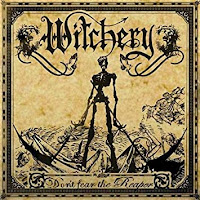 As it was previously mentioned, there are plenty of bands in Sweden who are dedicated to refer back to the style of the '80s with their music by playing something that is somewhere between Venom and Bathory in style.
The same mix of heavy, speed, thrash and black metal is reflecting back from the music of Witchery who were formed in the late '90s. "Dont' Fear the Reaper" is their 4th full-lenght album in line. There are plenty of catchy songs and riffs to find on the album, that count as real heavy/speed metal gems, and thogether with the excellent sound, they are very effective. Blackened vocal style is narrating the lyrics, that could sound very nostalgic by their typical '80s touch. For some it might seem that the band was a bit hasty with making the album, cause some songs sound incomplete by leaving a feeling that something's missing.  That's partly because of the effectiveness of songs like "Stigmatized", "Draw Blood" or Damned in Hell", and als because the band probably wanted to band focuse more on thrash influences at other songs. Of course a more balanced mix would sound better, but "Don't Fear the Reaper" offers enjoyable entertainment for the fans of old school influenced metal.
Posted by Personal Warlock at 10:00 AM No comments: 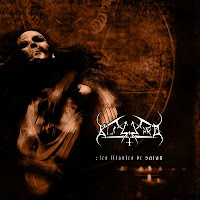 By following the traditional Norwegian style of black metal, Blizzard debuted after a few demo records with "Les Litanies De Satan".
However modern influences also could be sensed on the album on the side of the old school blackness. Their music is more riff-centric than the old classics are, and the themes showing larger diversity. The album is also more melodic the same time, it's like trying to take place somewhere in the middle while drifting between various influences. The atmosphere has minimal role therefore, and occasionally deep growls assisting to the ordinary black cawing to turn the main impression more inhuman. So "Les Litanies De Satan" includes a little bit of everything and formed a whole from all. This counts definitely as the strong point of the album, because this mix wasn't against unified sound and serves as a genuine feature, an alternative aspect how the style developed further. The album could be enjoyable not only for the fans of traditional black metal, but also for those who prefer the more melodic or modern styles of the genre.
Posted by Personal Warlock at 9:05 PM No comments: 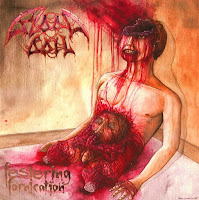 There was an endless line of brutal death bands in the late 00's, but only a few of them were memorable. Bloodboil was fortunately one of those who offered more than bare technical brutality that's able to turn the whole music totally boring after one minute of listening.
"Festering Fornication", their one and only album mixed old school influences with the modern direction of brutal death. Their riffing and drumming style often referred to late Cannibal Corpse (even the cover artwork showed similarities), and they've also symphatized with technical themes that reminded to the intensity of Deeds of Flesh. They had quite catchy themes and switching solutions that made their music much more enjoyable than most modern brutal death with their sudden math metal-like theme switches. Bloodboil also experimented with some, but they didn't go too far with those. High sound quality and deep growling vocal style completed the circle, and of course the inevitable lyrical concept based on gore and killing spree. "Festering Fornication" is an excellent brutal death album, could be very entertaining for the fans of the genre.
Posted by Personal Warlock at 7:21 PM No comments: