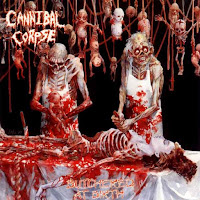 Cannibal Corpse is the most well known and best selling death metal band, also a common "introduction band" into metal for beginners. Many people's opinion that they are overrated, and they were only seeking for attention, but let's just take a closer look.
Usually when someone's hearing their music the first time, the most common reactions are turning the music off as soon as possible with swearwords, or laughing cause it's couldn't be taken seriously. After "Eaten Back to Life" they had a notable musical progression, their songs turned more intense and raw the same time, but "Butchered at Birth" also includes a lot of weird, sick melodies. It was some new way how to introduce sickness musically, and the never ending insane hammering added a stressing feeling to the main view. The brutally deep vocals, which may reminding many listeners to some wild boar's grunting or to Cookie Monster, are growling about the the most absurd topics of gore and horror including very hideous existing aberrations with endless violence. With the most disturbing and disgusting visuals on their cover arts, it was a perfect recipe for a scandal, if the lyrics were not enough already. Those lyrics, which are not understandable at all by the common opinion. Cannibal Corpse was trying to break through all possible borders the same time, that made them the most notorious band of the genre, wether the audience found them annoying or made them smile.
Posted by Personal Warlock at 8:49 PM