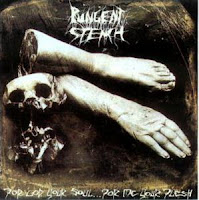 Even though Pungent Stench was only a death metal band, their name was often found on the side of goregrind and grindcore bands. They became widely infamous before extreme music fans very soon in the early '90s with their gory and morbid humor based music.
On some imaginary scale which may grade bands after how disgusting topics they were into, Pungent Stench would be in the main line next to bands like Autopsy and Cannibal Corpse. This ambition impregnated even into their sounding, because the whole album sounds very putrid and gives the impression that even the vocals were recorded in some cesspool. They were not far from grindcore with their simple, catchy themes, but there was a lack of frequent grinding parts. Their approach of extremity wasn't so common, because it couldn't be taken seriously, but if it could be for some reason, it was usually very effective. Pungent Stench was very determined about to follow, or better to say: to lead in this way and kept shocking the audience with their loathsome issues.
Posted by Personal Warlock at 9:45 PM