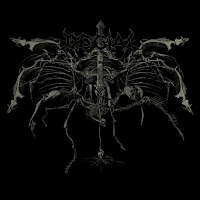 Degial's full-lenght debut wasn't exactly what could be expected at first from a Swedish death metal album. At one hand their music couldn't be sorted to the countless others that are strictly following the traditional sound and song structure of their own old school scene.
But while listening, it gets clear, that by avoiding one generic direction, they fell into another one. Their music is way more complex than ordinary Swedish death, frequently assisted by fast, and short guitar leads, that are usually ending up into great solo themes. The main themes are diverse and also influenced by heavy, speed and thrash metal. This kind of complexity isn't too far from technical ambitions, and embedded into softer sound, in total "Death's Striking Wings" strongly reminds to early Morbid Angel. If it's about the Swedish scene, this technically more creative and lighter approach is related to bands like Dismember or Dissection. In the early '90s this style also served as a first push from extreme metal to progression, but Degial preferred to not cross that line, and their main concept still followed the tradicional direction. From another perspective the album has no lack of intensity at all, but it lacks the sound of death metal, and by it's mixed and technically repetitive themes it doesn't necessarily sound like a death metal album. With less frequent speed-ups it couldn't be called like that either. In fact this could have been advantageous for the band, partly because they are kind of outsanding not only from the Swedish scene, but also from the main death metal scene in general. And by playing death metal that isn't mainly for death metal fans might make their music compatible with wider audiences.

Posted by Personal Warlock at 10:57 PM No comments: 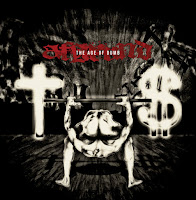 Afgrund is a quite interesting band in the modern grindcore scene. They were formed in 2006 by Swedes, but when their third album "The Age of the Dumb" came out, none of the founding members could have been found in the band since a while, and not even Swedish members. So Afgrund became a Swedish band that isn't Swedish. However the frequent line-up changes didn't lead to any change in their style, except they don't write Swedish lyrics anymore.
Their music mixed the less popular, but pretty old school crust punk influenced grindcore with the themes and sound of modern death metal. Reanimated by the porn grind era of the late '00s, this style started to spread very slowly, but gained less attention and stayed in the shadow of porn grind. After the withrawal of the countless porn grind bands, the style had a bit bigger space to fill, and a decade later crust punk influenced bands became more common and determining in the main scene. On the side of the main essence of Afgrund's music, strong social and political criticism also counts as an old school factor. Interestingly even if punk influences are evident, they doesn't sound like in old grindcore bands, and also not restricted to punk themes. Involving death metal sound and themes is a modern feature, that makes the music way heavier and more brutal. It's debatable (and it's up to the listener) which form is more effective, the old school grindcore, that created contrast by switching suddenly from basic punk themes to extreme speed, or it's modern version, where the contrast disappeared, the music sounds all-round heavy, and therefore became more unified. In case of Afgrund the mixed style proved to be advantageous, since their music is more diverse than what could be experienced at ordinary crust punk or grind/death bands, and on this level because of the increase of enjoyability that followed, also served the intensity in long term.

Posted by Personal Warlock at 4:00 PM No comments: 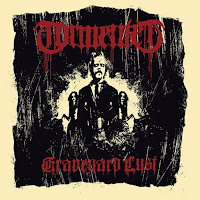 Tormented's debut was made to recall the same ancient old school spirit that could have been experienced at bands like Death Breath, Excoriate, or Bastard Priest. Intending to recall a very familiar '80s underground feeling that in this form didn't even exist back then, but still it's strongly relatable for the fans of that music era.
Their returning EP "Graveyard Lust" followed the same line, but showed some technical development. What didn't sound completely fitting together on "Rotten Death" (though it wasn't a weak debut), showed the level of perfection on "Graveyard Lust". The difference is slight, since this kind of raw, strongly thrash based hammering style doesn't offer many possibilites, but for the desirable effectiveness in this style the same reasons are responsible than for the lower diversity. Somehow it's basic themes, intensity and classic horror-based feeling makes it impossible to get enough of it. The style features of course also giving to the traditional buzzsaw sound of Swedish death secondary role to fill. It could be definitely sensed in their music, but by forced into the background, and since nowadays the number of death metal bands with Swedish sound is quite close to infinity, it might count as a quite advantageous step. In summary "Graveyard Lust" might be strongly enjoyable for the fans of old school musickness.
Posted by Personal Warlock at 12:47 PM No comments: 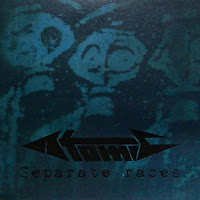 Atomic debuted as one of the most updated Hungarian metal bands in the early '90s, and their quite updated approach led them to switch style and record an industrial metal album in 1996.
Even though their full-lenght debut "Slashing Victory" was quite uncomparable in quality to anything that have been released in Hungary in the '90s, the band was badly underrated, and they have split-up, so "Seperate Races" wasn't released until 2018. The album's main influences followed the changing tendencies of the middle '90s, when most metal bands tried various ways to renew their style. Industrial metal started to rise from the early '90s thanks to bands like Nine Inch Nails, Ministry or Fear Factory, and even some previusly way heavier bands like Sepultura drifted closer to these tendencies. For most old fans the mix of metal and industrial was kind of controversial, and similar style switches didn't seem to be the most fortunate steps. However, Atomic did something extraordinary again by this switch, since nothing similar could have been heard in the Hungarian scene even since now, and again the quality of their music matched to the standards of the international level. In it's local scene "Separate Races" was ahead of it's time again, maybe even more than the band's debut was. The themes are catchy and enjoyable even in their repetitive form, and to the heavy sound factory production noises are assisting, to increase the cold, unfiendly impression. All the key features of industrial metal were applied in the most advantageous way, and if it's about '90s industrial, "Seperate Races" could be compared only to the best albums that have been made in this style. In general the album is intense, and despite it's cold impression, it also shows some party compatibe aspect. Atomic's approach was quite genuine, and it's easy to distingush them from all other well known intustrial metal bands and projects.

More information about the band:
https://www.facebook.com/atomicthrashband
Posted by Personal Warlock at 2:04 AM No comments: 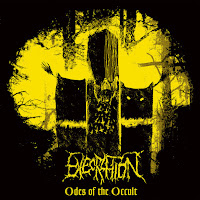 After a quite brutal debut, Execration have returned with another masterpiece, that didn't try to repeat the first album, nor to exceed it's extremity.
"Odes of the Occult" had a way different perspective, that tells about some experimenting ambitions. However, the music is far from being experimenting in the ordinary way: it's not some path searching endeavour like in case of young bands, Execration sounds very deteremined about what they want to do and how. Slow downs became more frequent, but they're only partly doom influenced. In cases when slow downs are happening, and they lack heavier doom-related themes, mostly atmospheric sound used to be involved, but not in this case. There's nothing to fill the void when it occours, and since the album have excellent sound quality, even the basic distortion is unable to create any atmosphere. This sometimes leads to a pretty anxius feeling, and at other times it reminds to extended slow and sinister themes of old Autopsy. This solution might seem simple, but still it's quite rare to find, since most bands applying atmospheric sound like a good old thing that always could work. Of course "Odes of the Occult" didn't lack brutality either, and the radical theme and speed switches creating enjoyable contrast. But because these switches having no "atmospheric guide", the album sounds pretty cold and it's not so easy to go into. Still this ended up as an advantageous outcome, since according to the main concept, "Odes of the Occult" supposed to sound could, unfiendly, and it needs more listening to discover it's plenty of great themes.
Posted by Personal Warlock at 1:19 PM No comments: 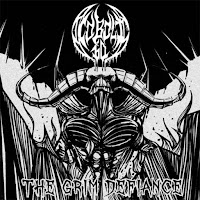 Cobolt 60 was formed as a black/thrash side project of the guitarist and the former frontman of the death metal band Blood Red Throne.
While their debut accurately included all musical features that could be expected from blackened thrash sound, "The Grim Defiance" drifted further from that direction. In total the album sounds heavier, way more aggressive and intense, and it's great sound quality also reduced the atmospheric effects of blackened themes. In this form it sounds more similar to Marduk or to late Belphegor, and the intensity of the speed ups also matching that level. Therefore even though switches to basic thrashing aren't scarce, the main impression gets closer to black/death.  On the side of the increased intensity, the diversity of the themes are also responsible for that. The thrashing parts might be nostalgic though, by recalling the most ancient, raw tendencies that could be expected from this style. This concept embedded into modern sound was mastered by bands like Mordant. Whether this all came from the intention to sound more brutal, or the generic tendencies of Blood Red Throne had indirect influence on their music, "The Grim Defience"  doesn't sound like an ordinary black/thrash album. More like the ordinary albums of well known bands that have been around since a long while, and they intend to join to some "decent, modern sound of nowadays metal" club. Even though the impression remains, that the creation of a more generic sound might have been the goal to fit wider audiences, the "Grim Deafiance" is a well composed, and quite enjoyable album, that could be compared only to the biggest names of the nowadays metal scene.

Posted by Personal Warlock at 1:18 PM No comments: 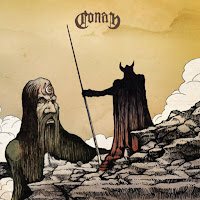 By their first full lenght album Conan's sound took a final form, and the band showed a great example again how effective musical minimalism could be.
Even though they always coming up with the simple combination of basic themes and strongly distorted sound, it's astonishing every time, how wealthy concept could be created by this kind of mysterious approach. By not telling much in the lyrics, just giving a hint to the listener, and performing that by 2 easily distinguishable shouting vocal styles, embedded into strong echoing effect. This might offer a far wider  scale of experience, than what could be expected from the band's "minimal effort"; simply by the hints that are given, cause this is an effective way to light up the listener's imagination. And of course meanwhile noisy, heavy riffs intending to wipe off the floor with the listeners head. Compared to "Horseback Battle Hammer" the drone influences are gone, and that had fortunate effect if it's about heaviness. Since in drone metal only the level of distortion and it's atmosphere is in focus, the rest of the possible musical features are forced into the background to fill a secondary role. But by leaving it behind,  the primitive impression of their music grew stronger, and strengthening the vocals also proved to be quite advantageous. "Monnos" might provide an even more exciting escort to that maybe mythical, maybe mythological world that was introduced on the debut EP. A world, that was lost so long ago, that it seems it might have never even existed.

Posted by Personal Warlock at 10:44 PM No comments: