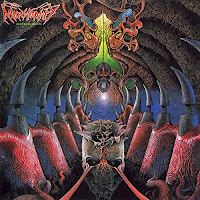 Monstrosity sparked wider attention very soon, with their first demo already, and took role in the Floridan death metal scene. Their early line-up may sound nowadays very stunning, because it included names which may sound familiar from bands like Cynic and Malevolent Creation, or maybe it's enough to mention George "Corpsegrinder" Fisher, who's name became notorious as the frontman of Cannibal Corpse.
"Imperial Doom" with it's raw brutality represented a more modern aspect of the genre, through the basic old school death metal themes, when aggressive hammering wasn't enough anymore. The themes turned into a more complex direction, not the feeling was in focus, but the mix of intensity and technical knowledge. This was usual in the second and ending period of the golden age of death metal. The search for some diversity was more like instinctual than scheduled, some bands turned melodic, others played more technical or progressive. Monstrosity was on the borderline of that change and reached the most suitable level of musical brutality for themselves in a bit more techinal way.
Posted by Personal Warlock at 10:13 PM