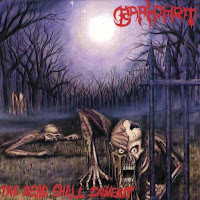 The early '90s extreme metal scene was not only impressive because of the countless bands that appeared world-wide, but because a lot of them created masterpieces from low budgets.
Baphomet's "The Dead Shall Inherit" became a cult album by it's simple but impressive themes. It could be a good introducing album into death metal, because all basic features of the genre are well exposed. Limitlessly rude music from the beginning with a cathy sounding and netherworld-like feeling. Unlike the main trends that time, not constant fast hammering expressed the intensity of their music, but the contrast. Excellent mid speed themes are the most usual by giving a main deviant character to the album, and that often continues with insane grinding. The main view with the grindcore influences are reminding to Broken Hope's "Swamped in Gore". The concept was probably the same, but Baphomet had a different and colder approachment to musickness. Not the intense putrid feeling was dominant, but aggressiveness with some dark origin.
Posted by Personal Warlock at 9:56 PM