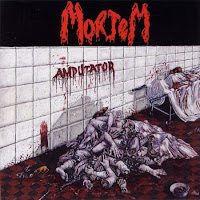 If Graveside could be described as the Russian Deicide, Mortem definitely could be marked as the Russian Cannibal Corpse. This short debut was one of the earliest death metal albums of the slowly rising Russian extreme metal scene.
And similar to Cannibal Corpse, probably they were also forced to explain themselves, that they are not part time serial killers and they do not support violence and sexual abuse. So the similarity of their music was not only about the very familiar themes and style, or cookie moster-like deep growling, but being all-round exaggerated. Cheerful lyrics based on gore, mutilation, necrophilia and of course cannibalism entertaining the listener, who may suffer from withdrawal symptoms of musickness. To play just like the same as their inspiring band wasn't the only reasonable result of their insane musical rampage, but to reach that level of sickness in music, which isn't easy to achive. Not only the enduring high speed was needed for that, it's only for the basic, inhuman impression. The weird melodies and catchy themes having the inviting role to this chamber of rotting flesh.
Posted by Personal Warlock at 5:38 PM