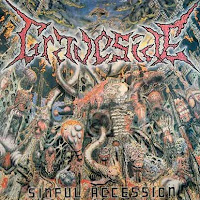 The early '90s death metal wave arrived to Eastern Europe with delay and it wasn't represented with the same push like in West, because of financial and technical difficulities. Still some bands were produced great quality and even if their rise up was short living, they left behind some exciting albums.
Graveside was mainly inspired by Deicide both in music and lyrics. Even their name sounded similar. The intensity and aggressiveness of their music maybe even exceeded the limitless rampage of their idols, because of the more diverse themes. As Deicide based the strenght of their music on repetitive blast beat charges, Graveside operated with a bit more diversity and that created a contrast that showed the main view more overwhelming and less monotone. But in general the themes are almost the same, and with deeper growling vocals, "Sinful Accession" could be introduced even as secret or unknown Deicide album. Yet, it's an enjoyable classic of the Russian extreme metal scene.
Posted by Personal Warlock at 9:45 PM