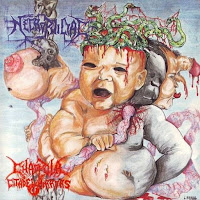 Necrophiliac's "Chaopula - Citadel of Mirrors" was an interesting, but sadly underrated event in extreme metal.
The concept is gore and the most hideous perversions, but even musically they reached an endlessly sick level. The vocals are reminding to grindcore with their shifting style between wretched sounding cawing and some distorted, almost guttural growling. The music is staying behind the borders of death metal meanwhile, but it's more complex and technical in themes than usual, and often very melodic too. Speed changes are also common and sometimes unexpected, but they doesn't made the music completely chaotic, but creating some morbid harmony instead. This unusual mix of diversity turned the album quite heavy and harder to listen for unprepaared ears. It's certainly one of the sickest deah metal acts alongside old Carcass, Autpsy, Cannibal Corpse and Accidental Suicide. The album is musically closer to old Carcass, but lacks the extreme intensity and it's more focused on the main insane feeling instead. A real masterpiece of musickness!
Posted by Personal Warlock at 8:33 PM