Mortification - Scrolls of the Megilloth (1992) 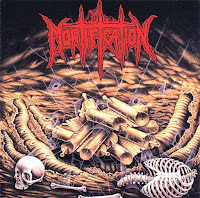 Mortification debuted as a thrash influenced death metal band, but from their second album, "Scrolls of the Megilloth" the thrash influences were almost gone.
Instead of those the listener recieves a very intense death metal material with powerful riffings. Their second coming showed a better quality both in sound and themes, and only could be compared to the "elite bands" of the genre. Some experimenting ambitions also showed up by common changings in speed, that made the main view more exciting. The interesting thing about the band, that while blasphemous lyrics are the most common in this style when it comes to religious topics; they are doubtlessly a Christian death metal band. They built up a whole Christian concept around their lyrical topics, which was probably necessary, cause growling gospels may sound weird. It's something uncommon for real, especially from one of the earliest extreme bands in Australia, but it proved their creativity and turned the genre more colorful. "Scrolls of the Megilloth" is not only an excellent death metal album but probably one of the most brutal aspects of how to love our brethrens.
Posted by Personal Warlock at 6:56 PM