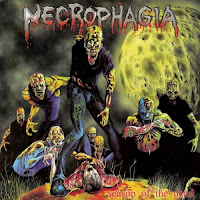 Along the Tampa Florida scene, but independly from them, others tried to merge into deeper extremities as well. And this independence or isolation resulted a different way of expression.
Necrophaghia was also one of the first death metal bands, and probably the most horror addicted one too. "Season of the Dead" is not only interesting because of this, or because it was the first full-lenght album on the side of Death's "Scream Bloody Gore", but this album is also a proof, that it's possible to do death metal vocals even if someone can't growl. The vocals sounding more like excited narratives which are sometimes ending up in moans by the pleasure that a gore fan could feel after the visuals of the bloodiest scenes. Killjoy's horror overdose added an ominous feeling by the calmer and melodic parts to the album, which are referring to the feeling of old horror movies. The music is more characteristic to express the "fun part", trying to convert the disturbing visuals into the language of music. The only difference is that the duration of suffering and the main plot line is reversed here. There are plenty of references to the classics of the horror movie genre. That gave the spirit of this band.
Posted by Personal Warlock at 8:56 PM