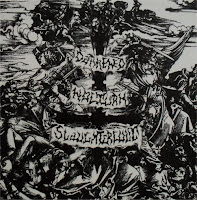 Black metal finally started to spread fast in the extreme scene after a few decades of delay. While in Scandinavia a strong fixed scene formed meanwhile, the newbies appeared first in higher numbers in other European countries.
Darkened Nocturn Slaughtercult was one of the heavier ones by their raw styled black metal, and they also payed attention on high sound quality. In traditional Northern black metal the atmospheric sizzling sound pulls down the effectiveness of themes and drumms, but in this case the atmosphere had minimal role, and the intensiveness of their music had main focus. The clear sound turned the extreme themes far more heavier, and didn't left many opportunities even for dark emotions to involve. Except this they kept the ordinary style features. The other interesting thing that they had a female vocalist by Miss Onielar, who didn't sound less authentic than any male black metal frontmen. Her performance was enough aggressive and insane to keep silent even the pickier audience who often having very deep arguments about trueness. Darkened Nocturn Slaughtercult may sound a bit modern compared to the old classics of the genre, but their compromiseless music gave a genuine new shade to the blackest extremities.
Posted by Personal Warlock at 6:47 PM