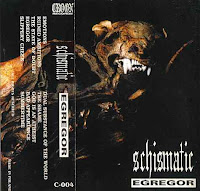 To change drastically and to turn into unusual directions to impress the audience, or to get wider attention wasn't something new in the mid '90s. Actually it was the main trend that time. But Schismatic may interpreted this situation a bit exaggerated, and made something extra weird by "Egregor".
It was so different from the first album, like if it wasn't even the same band. They borrowed a new frontman from Necrobiosis, plus they involved light melodic and jazz elements unexpectedly, without any warning. Pestilence experimented with something similar on "Spheres", by mixing death metal with fusion jazz, but that was at least unified, resulted an interesting atmosphere and they tried to reach some balance. On "Egregor" the concept was the high level of contrast, to turn from one extremity ot another. In this case the highest level of contrast that's possible to make. Whether "Egregor" was  made for unserious reasons or it was a failed innovating ambition, it could be fun to listen to because it's simply so weird. It shows how death metal could end up in so light melodies that may appear in the worst retro family tv series, or in a jazz club report, or even in such music that could be used up for soundtrack in old socialist educating documentaries about manufacturing technologies. An interesting and unusual album for sure.
Posted by Personal Warlock at 9:03 PM