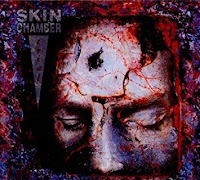 Skin Chamber was a short-lived industrial metal side project of the experimental group Controlled Bleeding. Even though they tried to reach this genre in their own reinterpetative way, it's definitely fit into the dark style of industrial that was developed by Godflesh.
While the first album, "Wound" was closer to the inhuman noise experiments of Controlled Bleeding, "Trial" was a further step into the more musical direction. Still, both albums were called that time as a sort of 'electronic armageddon'. Both were completely guitar centric albums, but the role of riffs was higher on "Trial", not based only on the effects of distorted guitar sound. These are probably the heaviest and most demoralizing industrial metal records ever, and their level of exaggerated features could be compared only to the extreme genres of metal. Even the vocal style could fit into death metal, and while in most similar projects it's artificially distorted, here real suffocating screamings could be heard. The main impression is very unfriendly, cold, destructive and filled with hatred. "Trial" doesn't remained only as a remarkable classic, but also showed the end of the road in the darkest depths of electronic music.
Posted by Personal Warlock at 9:51 PM