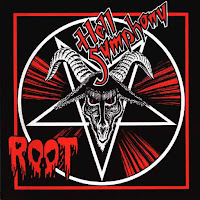 Since the basics of the black metal genre were lay down, a lot of time passed, and a second wave was about to form in the late '80s, and this new endeavour materialized in the early '90s.
Root musically redifined the genre from the basics by the influences of Venom and Bathory. That means "Hell Symphony" musically is built up black metal straight from heavy/thrash elements. Similarly to some other rare tryings far from the Norwegian scene, they concentrated on the themes more than on the atmosphere. The concept was in their focus first of all, which was satanism at an even more direct way than it was usual in the scene that time. While most other bands only referred to some upper dark force, wrote blasphemous lyrics, or praised Satan, Root had a whole detailed concept. The album is completely dedicated to the demons and dark gods. From Root's discography probably "Hell Symphony" became the most permanent record because of it's genuine approachment and role in the genre, which was quite modern in those times.
Posted by Personal Warlock at 10:51 PM