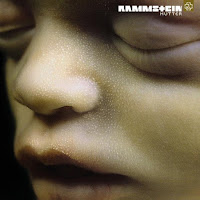 Even though the official language of the international music scene have to be English, there are some fortunate exceptions when this rule gets ignored. Rammstein gained wider success with their second album "Sehnsucht", and by "Mutter" their music became the essential part of the metal for beginners basic pack.
Their main influences could be found in the uprising German industrial scene of the early '90s. Their musical and lyrical features referring back to Oomph! so many times, that it's impossible to not name them as their main influence. This is the origin of their mix of raw sound, short but effective lyrics, and sometimes hidden, sometimes direct sexual background. Rammstein just developed it further and formed to their heavier taste. The reason why they took place between the most known and best selling metal bands is their genuine combination of simplicity and heaviness. Simple but heavy and repetitive themes, simple but expressive message, and Herr Lindemann's characteristic vocal style that became an icon. So their music included a little bit of everything from the main features of the style. From martial industrial, from the party centered style of the underground dancefloors, and even from the darker, horror related direction. They were also not afraid to involve instruments and influences that were not usual to hear in industrial music. In this way "Mutter" was more diverse and progressed than the second album. The band gave a new shade to the main industrial metal scene and bacame one of it's most influental bands.
Posted by Personal Warlock at 7:21 PM