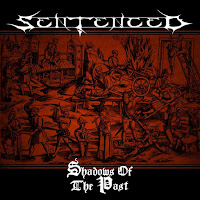 Before Sentenced became the favorite of the mainstream metal fans with their melodic, gothic music, they had a very strong and excellent death metal album as a debut. Their earlier style was so different from their late one, that it couldn't be told that the same band played both music.
"Shadows of the Past" lacks the feeling and freshness of a beginner band somehow, it's a pro and well composed album, and it sounds like there is nothing accidental. Perfect in themes and sounding, and shows larger diversity than most bands that times. Finnish death metal was usually more melodic than what could be heard from the other scenes, so that parameter also took a role to make the main view more exciting. The songs are longer than usual too, filled whith various themes built together, which proves the wealthiness of their musical imaginations and wide range of creativity. No boring moment could be found on this album, it was probably the top masterpiece of Sentenced, and also a heavy record of the past.
Posted by Personal Warlock at 8:03 PM