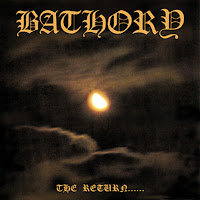 The birth of black metal wasn't a so fast process like the birth of most other styles. When a new genre becomes known before larger audience, everything was surely done already what new that actual style could show. It's a common point, but after Bathory's debut a lot of years had to pass for the forming of the black metal genre, and it's wider success came even much later.
Bathory is responsible for most of it's features. The first album was simpler and had pretty weak quality, but in the long run that also became the trademark of the genre. Most of the late bands were directly up to do their recordings in the worse possible quality to imitate that noisy rehearsal sound which is similar to the TV sound when there is no program signal. "The Return..." showed more from those dark topics and musical themes, which were far more extreme than everything that was made before. Musically it was more complex, had interesting experiments with the sound effects and nevertheless it was darker, noisier, more intense and far more evil. The music critics -like usually- were not so impressed or excited to hear this kind of innovation, and they couldn't foresee the wide influence that Bathory had on the main metal scene with time. Bathory's early period became cultic not only because it was the first black metal, but also for the unreapeatable feeling that this music had.
Posted by Personal Warlock at 7:49 PM