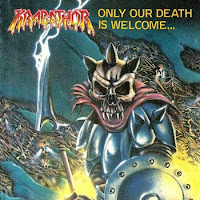 While Root counts as the most permanent local black metal influence in the Czech extreme metal scene, Krabathor had the same role in death metal.
The comparison of the two bands is not reasonable only because their names became the most notorious and known in the early '90s, but because both of them took a long and influental role in forming the local scene. "Only Your Death is Welcome" is a thrash influenced old school classic, a remarkable masterpiece that didn't fall behind in any way from the quality and actual musical progression of the main scene. Some older heavy metal references also could be found in the themes, such as occasional experimenting with the atmosphere. Similar small surprises trying the spice up the cruel and rough main impression and turning it more enjoyable. Even though it was only their debut album, it sounded very stunning and mature. It's sick all-in-one, could be compared only to the biggest old school death metal classics.
Posted by Personal Warlock at 2:13 PM