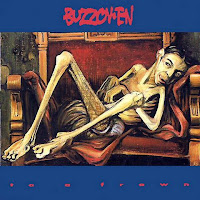 On the side of Eyehategod, Buzzov•en should be mentioned as the most effective and exaggerated bands of the early sludge metal scene.
Unlike others in this style, intensity had main role in Buzzov•en's music, instead of melancholic, demoralizing impression. Therefore doom metal influenced heavy riffings and sound is more like occasional. Hardcore punk and thrash metal had main influence on their music, which represents a different approach to this style opposed to the more common southern rock and doom origins. Of course the dirty, noisy sound is inevitable and gave the main tone to the lyrics based on inner strugges led by self-destruction, violence and hatred. So if the pulling off, demoralizing atmosphere isn't so strong in the music, the lyrical topics and their performance by the unfriendly wretched-cawing vocals are well supporting the antisocial tendencies. And making sure that those who desire violent musical entertainment will not be disappointed. "To a Frown" was the key for the band for wider attention and international success, and though it's a simpler and rawer album than their late ones, became an important sludge meral classic too.
Posted by Personal Warlock at 7:18 PM