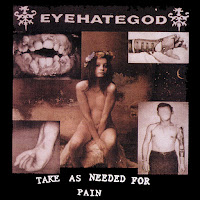 Slow speed mixed with the intensity of punk music, heavy themes, very noisy sound, strong self-destructive impression and endlessly demoralizing feeling became the main features of a genre, which was well introduced by Eyehategod at the first time.
Their debut, "In the Name of Suffering" was described that time as some raw punk/doom experiment, and even if the band counts now as sludge metal veterans, it wasn't a false designation at all. Similar ambitions were not unknown in the early '90s, but Eyehategod made it and put together in the most exaggerated way. "Take it as a Need for Pain" had better sound quality, and less doom influences, the raw power of noise and desperate rage was more in focus. And of course the provocative lyrical topics and disturbing visuals that are inevitabely attached. Though both albums are evergreen classics, the second one trasmits better the antisocial, self-destructive feeling that became the gave the main character of the band and the sludge metal style.

Posted by Personal Warlock at 6:35 PM