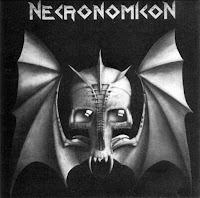 Like all scenes, the German thrash scene also had unfortunately underrated events, and one of them was Necronomicon's first album. In this case contracts with bad labels and the location are the responsible features, because South Germany wasn't the most ideal place for common gigs.
My opinion is that it was one of the most interesting albums that time as well because of their creative ideas. By first listening it's clear already that their music was heavily influenced by Venom, but they tried to go forward in that way. It's doubtless, that this debut album is quite raw, sounds pretty dirty and old school, so includes everything why an old thrash band could be liked. Their music also shows a genuine approach of this style by a lot of classical heavy metal references. Unlike other bands in this style, for instance Destruction, Sodom or Kreator, their dark topics were not based first of all on occultism or brutality, but they were more into society critics or fantasy based references. So this intense, wild, raw music includes much more than most others in this style that time.
Posted by Personal Warlock at 10:52 PM