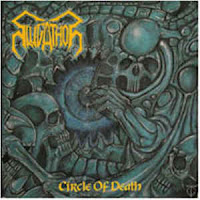 The traditional sound of Finnish death metal was represented by Slugathor during their decade long active period. They've started with an intense old school debut, and on the second album "Circle of Death" they went forward by giving place for other influences.
Their music is based on old school death metal with deep growls that they completed with a second backing vocal to increase the insane impression. This they amplified with doom influences by common slow downs and noisy, heavier sound. All that gave a great opportunity to add the short simple repetitive melodies that are quite common to find in Finnish death metal. These melodic parts are effective by creating a contrast with the noisy/heavy background and resulting some netherworldish dark impression. "Circle of Death" may remind to old Asphyx or Bolt Thrower by it's combination of speed changes and heavy themes, but after more listening it gets clar that the band preferred to keep their local influences. The album offers excellent entertainment in high quality for the most committed fans of old school death.
Posted by Personal Warlock at 11:46 AM