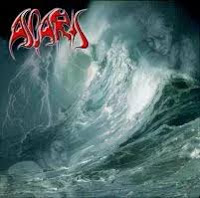 Ascaris have returned after a longer break with "Storm of Dilemmas", that became the swansong of the band and the summery of their musical work the same time.
During their one decade long active period they had only two full-lenght albums and one EP, but each record showed a different state of their musical progression. "Storm of Dilemmas" included the melodic ambitions of "Grapes of Wrath", but also turned back to the old school sound of death metal that could be heard on their debut "Uncured Sickness". This album didn't have so catchy melodies like the EP and also wasn't so raw like the debut. It was somewhere between with it's more mature sounding themes played by already well experienced musicians. They never kept in secret that Death was an inspirational band for them by their occasionally returning references, but the influence of Death's late period is more evident in the themes of this album. And if it wouldn't be enough evidence, they also covered a song from "Symbolic". "Storm of Dilemmas" took place on the borderline of styles such as the EP back than, but in this case the band came up with more diverse themes. The album was intense and fast just like how old school death metal should be, but also introduced the modern sound of the genre. Nostalgic and progressive the same time and consumable for wider audience too. Another masterpiece by Ascaris!
Posted by Personal Warlock at 7:41 PM