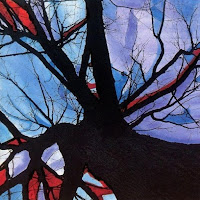 While old school death metal was fading away, only a few old bands kept playing their original style and even less new bands tried to start anything similar. Ceremonium's debut was an excellent example of ordinary death/doom, free from any popular ambitions.
"Into the Autumn Shade" was a melancholic and desperately dark album, but didn't try to operate much with gloomy aesthetics. The way of approach is still raw sometimes, such as the main composition, still it's enjoyable and their goal is clear. The returning strong atmoshpere sets on a down pulling impression, but the slow and very heavy themes and the brutally deep growling having the main role. Compared to the early classics of death/doom, this atmosphere and some occasional changes are modern features. Something similar could be heard already by Disembowelment on maximum intensiveness. So even if the album kept the old roots, it was also opened to newer influences in some ways. This temperate step made "Into the Autumn Shade" different from the earlier classics of the genre, but still fits into the line of the heaviest ones.
Posted by Personal Warlock at 7:36 PM