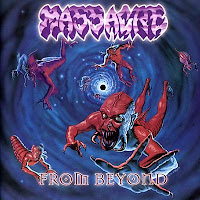 After a long lasting struggle, in 1991 finally came the moment for Massacre. The band was formed by ex-Death members who played on the side of Chuck Schuldiner during the albums "Leprosy" and "Spiritual Healing", and with Kam Lee, who was the former vocalist of Death in it's demo times, a legendary line-up was teamed up.
"From Beyond" could be a perfect definition of what we call now as old school death metal. A rough, intense album with catchy themes and short, noisy but very badass and demoralizing solos which sounding like they're referring to some netherworld origin. It's strongly thrash influenced all around, but the aggressiveness and the sounding are pointing through on what the fans of extreme music were used to from thrash bands in general. Plus Kam Lee's deep growling also became an icon of the death metal genre, and simply couldn't be confused with any other vocal styles. "From Beyond" was a very unique musical event that couldn't be repeated.
Posted by Personal Warlock at 9:12 PM